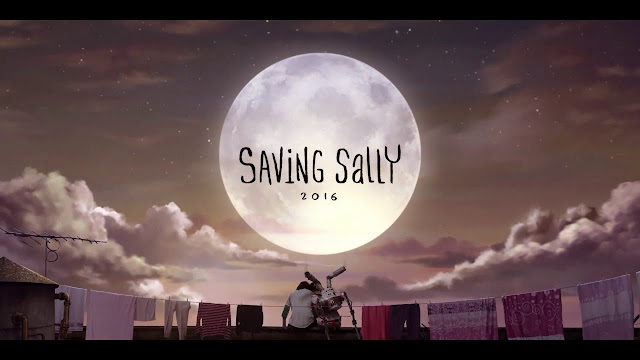 After 10 years in the making, ‘Saving Sally’ hits the theater last Metro Manila Film Festival (MMFF) 2016. It was something different from Filipino Films. The story started when Sally (Rhian Ramos) and Marty (Enzo Marcos) met at the school and became best of friends. Sally is an inventor, who helped Marty to avenge the Bully. They became inseparable after the incident. Marty is secret inlove with Sally. He drew her and paste in on his wall but he covers it when Sally is around. The story revolves on how Marty is so ‘Torpe’. Hahaha The problem starts when Sally met another guy and her adopted parents were so strict. Imagine the love of Marty for Sally is unconditional. He can sacrifice his feelings just for Sally’s happiness.

Saving Sally was one of the movies I am looking forward to watch. I first read it on Saab Magalona’s blog (Yes! I am an avid fan of her. *fan girling*) I love supporting Filipino movies. This is one unique idea from a brilliant mind. As you all know, this kind of movies especially the animated ones, those are rare in our country. The soundtracks are so superb. The animations and artistic background is so witty if you read and observed every detail. If you love art, this is a moving art as I may say. Moreover, Rhian Ramos is a good actor. She brings emotion to the movie. Unfortunately, I think Enzo Marcos lacks some feelings towards Sally. He sounds neutral most of the time. I prefer they used Tagalog as the language of the movie. I think it would be wittier if they used our language. The storyline was ordinary. The usual love story, it is predictable. However, the effort they gave to this movie was excellent. Kudos to everyone part of the movie.