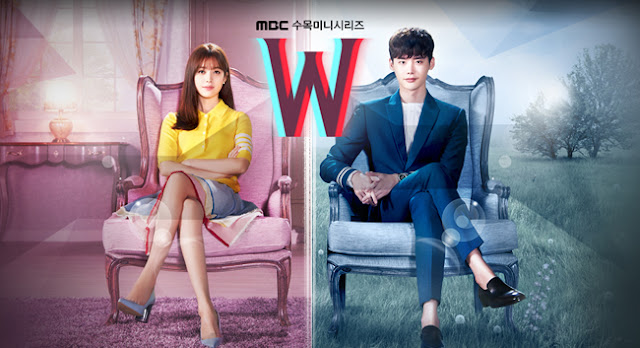 For today, I will post my review about W. Yes. Tamad na tamad po sila magtitle kaya isang letter lang ang bet nila ipangalan sa Kdrama na ito. LOL. W is about the world of comics vs reality. The main character Lee Jong-suk as Kang Cheol, he is a gold Olympic medalist in shooting that was suspected in killing his own family because of the unknown killer. Then, after 10 or more years, he became rich and wants to know the identity of the killer who killed his family. On the other hand, Han Hyo-joo as Oh Yeon-joo is the daughter of the famous creator of webtoons called W and she is also a doctor.  She will be the love interest of Cheol. First encounter of the two will be the accident on the rooftop that almost killed Kang Cheol but Yeon-joo went inside the webtoons to saved Cheol. The rest of the story should be watched. Haha

The Verdict:
W is one of a kind Kdrama. It is not your typical love story. It is real vs. reel life. The story is a little bit confusing. Haha If I were a webtoon follower from the tv series, I will be super confused on what is happening to the comics. Haha It has a hint of drama, sweetness and action. I love the transformation of Oh Sung-moo (the father of Yeon-joo) he became very convincing to be a villain and at the same time a good person. He’s acting was something to look forward too. However, for me this Kdrama lacks suspense and the end of the story is not impressing. Well, that’s my opinion towards the end. In addition, I am not fan Kang Cheol’s acting skills or hindi ko lang sya bet. Ang payat kasi. LOL

✭✭✭✫✫
Overall, I will rate this Kdrama 3.5 stars out of 5 stars.