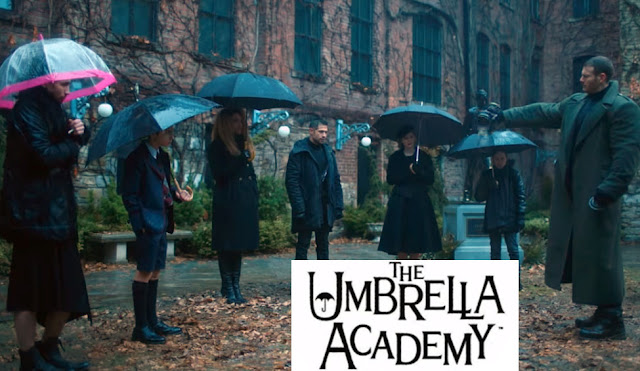 This series is an adaptation of Gerard Way’s famous comic book named The Umbrella Academy. In addition, to those people who don’t know Gerard Way he is the one and only vocalist of the band called My Chemical Romance. Who doesn’t know Helena and Black Parade? Gosh! You are living under a rock. Haha or I’m just starting to be a Tita or maybe only people with my age range knows him like 19-ish?? hahaha. Char! I did the research for you, if you’re interested or curious to know him. Please watch their music videos from the past and tell me. Video below.

Anyways, back to the series…

It started in the year 1989, there are 43 infants born randomly and instantly because the entire woman who got pregnant doesn’t show any signs of pregnancy before they gave birth. A billionaire named Sir Reginald Hargreeves, tried to adopt every one of them but only seven babies were adopted. He was the one created the Umbrella Academy, to prepare and groom them to save the world. Fast forward in the present, he died that is the reason why his children gather again for his wake and to remember him. During his burial, number five suddenly appeared from the future. He told some of his siblings that apocalypse is coming. End of intro. Hahaha I will stop here to avoid being a spoiler.

The series is different from others. It started a little weird but once you continued it, you will get hooked for sure, because that’s what happened to me. Haha I just got curious for Gerard Way was the creator of the storyline. I did not expect that it would be action packed episodes. It has too much mystery, because some of the character’s background is not that developed yet. I am also expecting it will give light to the characters on the 2nd season. It has suspense, thriller, mystery, action, time travelling and many more. I could compare it with X-Men, it has the recipe of powers plus the word apocalypse and someone guiding them like professor X. Do you agree? In addition, I really enjoyed the twist of the stories. I love it! I will definitely wait for the next season. By the way, I love the OST.

Just a short intermission, here is the soundtrack of The Umbrella Academy:

Check out the office Trailer:

Have you watch it too? What are your thoughts? Comment down below!