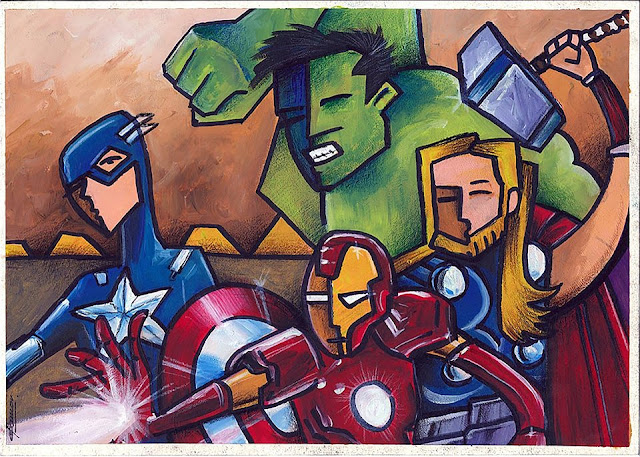 The time has arrived! Finally, the second franchise movie of Avengers is now showing on the cinemas. The excitement we had was unmeasurable. I am surely a marvel fan. This post might have some spoilers so I am warning you. Haha

First of all, who is Ultron? According to my research and theory, (let us say once upon a time I got curious and got addicted on searching about Marvel characters. Tee hee!) he was built by Ant-man the first avengers ever. I think that's reason why they will make it to a movie because to connect the dots. Moreover, Ultron is a program, an Artificial Intelligence patterned to Hank Pym's (also known as Ant-man) brain. Unfortunately, ant-man has a dual personality. Ultron got that part also, the lunatic side of Hank Pym. Because he has the mind of his own, he wants to evolve the earth. He wants peace but on a different level. He wants the extinction of human beings.

On the movie, they introduce new avenger’s member like Vision, Quicksilver and Scarlet Witch. They have extra ordinary powers. Then again, there is Hawk Eye. Mortal. Haha I love the part when he was talking with Scarlet Witch about being an Avenger. He said that he was fighting robots with his bow and arrows. No one cares where he is. For me, it was a little unfair for him because everyone has an extra ordinary ability. I thought he will be killed at the end but thanks to Quicksilver, he was saved. However, Quicksilver died. Scarlet Witch got furious with Ultron so she killed him.

Did you know? The twins Scarlet Witch and Quicksliver are the son and daughter of Magnito from X-men. How amazing the the crossover of the characters. I am really impressed with the world of Marvels. How could Stan Lee and the gang thought of every darn thing! Brilliant imagination to the extreme.

By the way, the surprise hero to the movie was Vision. He should be the new body of Ultron but the downloading of the program was not finished so when Iron Man and Hulk got the capsule they reprogram it. Then, it was the result of the new hero called Vision. Everyone got stunned when they saw him holding the hammer of Thor. So it means, he is a good guy. Only the deserving person can hold Thor’s hammer and can also rule his kingdom, Asgard.

This movie was superb. No dull moment for sure. The stunts were amazing. Everyone has their own spotlight on the movie. I am really looking forward for the new Marvel movies soon! Next will be Ant-man and Fantastic Four for 2015. I can’t wait.

How about you? What are your thoughts for this movie? Share it below! I am excited to read it.